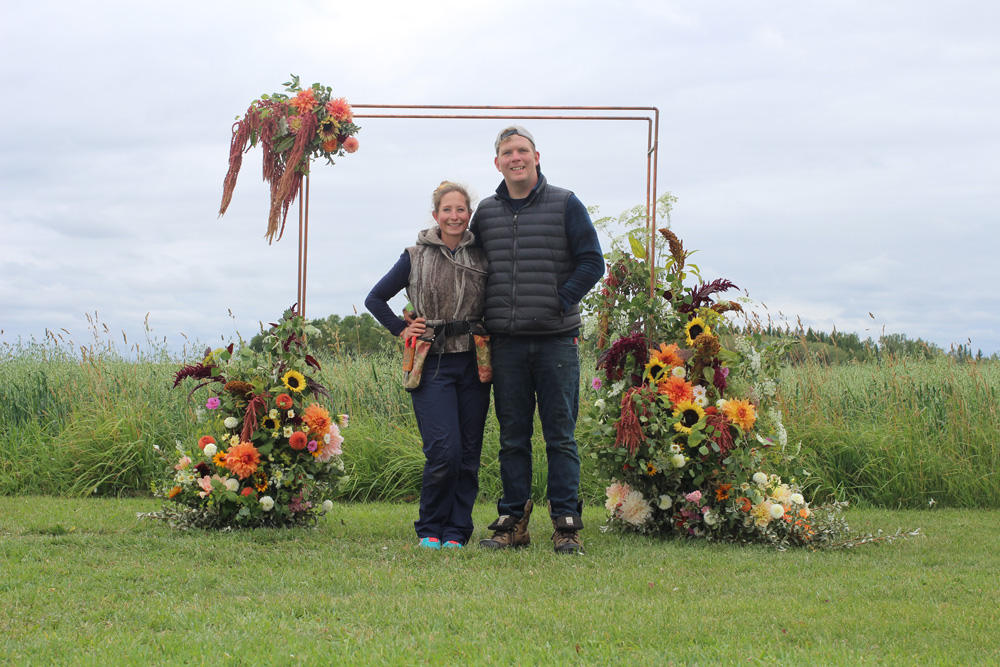 For the past 6 years, florist-farmer Elfi Rose, along with her husband, Jordan, have owned and operated Blue Moon Farm just outside of Didsbury, Alberta. From March when seedling starts begin indoors, to September after the last flower is cut, you can find Elfi working diligently on their farm, offering fresh cut florals for wholesale, CSA subscriptions, bouquets, arrangements, and everything in between.

Elfi embraces the seasonality of flowers and encourages her customers to do the same.  Her mantra is to focus on whatever Mother Nature happens to be featuring at a particular time. In her own words, “Seasonal is fresh and vibrant, and special, because it has arrived at its particular moment to shine each year”.

Elfi describes her love for flowers as verging on “obsessive”, for it is not only the beauty of the blooms that inspire her, but also the challenge of growing them. Gratification is far from instant. Even when everything doesn’t unfold as expected after months of prepping, planning, seeding, weeding, and watering, her enjoyment of seeing the process through from seedling to pockets of heavy blooms makes it all worthwhile. Laughingly, Elfi affirms “90% of farming is not always fun, but there’s something else we get from it, a lesson, a way of life, a mindset, and a sense of achievement — it’s about the journey”.

A lot of work is packed into a short growing season. The weather, which can be far from consistent, plays a large role. As all farmers know, any number of challenges can be encountered in bringing a crop to harvest. Although the process year-over-year is similar, it’s important to stay vigilant, ready to adjust, and learn as needed.

As a family farm, Elfi and Jordan operate as a team. While Elfi plans and performs many tasks on her own, Jordan, who also works a day job, is always ready to contribute in endless ways to make their farming dreams successful. Jordan’s contributions often involve providing the physicality some tasks require along with applying his mechanical expertise.

A year typically starts with seed preparation in March, and planting outside (covered) begins mid-April, continuing until the end of June. The first bulb flowers make an appearance around May long weekend, in late June the Ranunculus and Anemones arrive, and by mid-July the annuals are beginning to bloom. Through the months of summer harvest, the day-to-day tasks of trellising, weeding, answering messages, and billing are continuous as Elfi Rose and Jordan move back and forth between the growing and harvesting chores, to selling and delivering the flowers to the market and focus shifts to the time-consuming daily task of harvesting. Frosts halts the Summer blooms in September, though work continues well past the end of the summer growing season, as the long list of fall chores is tackled as they try to beat the snow. Then there’s a moment for reflection and it’s time to order seeds for the next year.

Elfi spent her childhood on Salt Spring Island surrounded by forests and farms, nurturing her appreciation for the beauty found in plants. She was drawn to the gardens and farms in her community, and from an early age was aware of the practices of people committed to chemical-free growing, mindful of their impact on the earth. These influences figure largely in her outlook toward farming and how she approaches her business. Blue Moon Farm operates in a way that emphasizes connecting with, and providing for her community, while honouring the natural process of growing.

Dahlias, being one of the largest crops on the farm, have won a special place in their hearts. Since childhood, Elfi has been mesmerized by the range of petal patterns and colours, as well as shapes and sizes of these late summer blooms. While a good deal of hard work is required to simply produce the dahlias, Elfi takes a great deal of pleasure in creating pleasing combinations in the bouquets and arrangements she prepares for CSA or farm market sale or requested orders.

Understanding seasonality is a huge part of supporting local flower farmers. Elfi says, ”Understanding that we have a limited season and that certain things grow at certain times, and if you miss it, you have to wait until next year”. While most of her florals are used during the peak growing season, Elfi incorporates dried stems to bridge the gap over the long winter. Statice, strawflower, ornamental grasses, ammobium, seed pods, and amaranth are staples. While washed out and bleached drieds are popular, that’s not something Elfi or her customers focus on, “People want colour in winter. They might not realize that, but they come in and pick the brightest thing there”. She also grows flowers and foliages that are naturally subdued in colour.

The tension between the short growing season, an influx of perishable products, and the need to move them isn’t lost on Elfi. “Sometimes people want things when you don’t have it, or you have too much at once. You can’t make any more time, and you still have to sleep”. Streamlining where you can is all a part of the process.

At the end of the day, it comes down to one thing for Elfi, “Things are best when they are enjoyed in their natural season”.